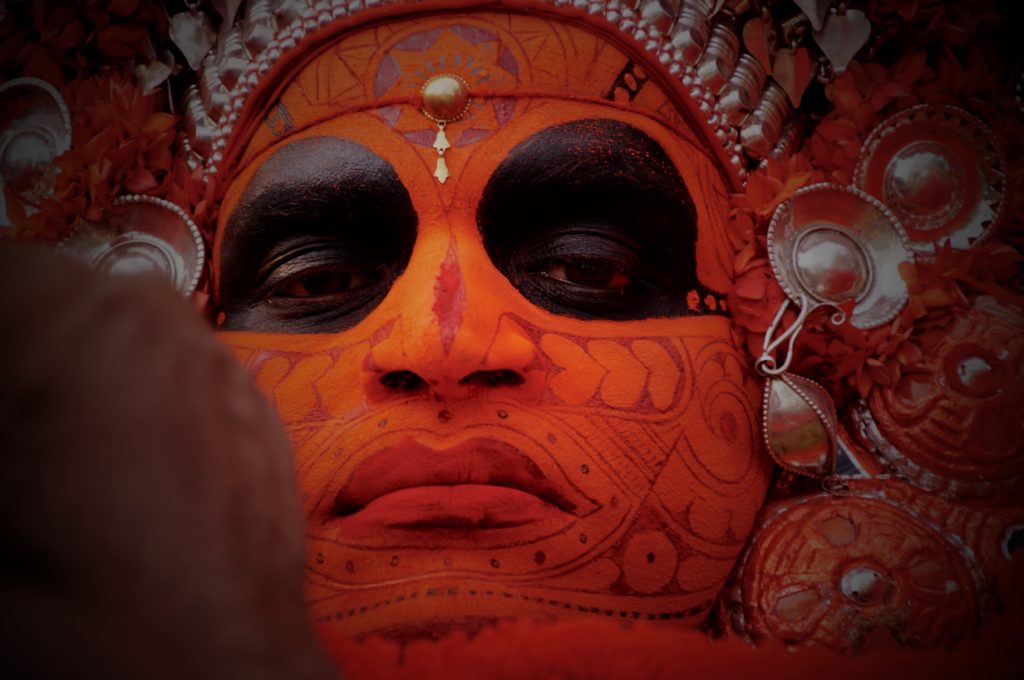 Kerala is the homeland of a large number of tribal communities out of which 36 are listed as “scheduled”  or untouchable people  according to the constitution of India.
“Living in the forest in the north of the state, these unique tribes are unique examples of inhabitants in isolated existences, still maintaining their culture and traditional values, against the tarnishing waves of changes in various spheres of their social and cultural life.” wrote the writer and photographer Balakrishnan Koyyal. 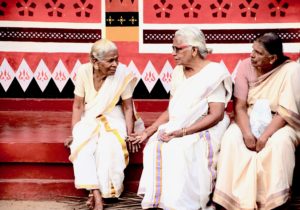 The Malayalee people are a group of mixed ethnic heritage communities  who speak Malayalam, a Dravidian language.

They constitute the majority of the population of Kerala.
Most Malayalees are descendants of the early inhabitants of India, the so called Dravidians (and speakers
of Dravidian languages).

Malayalees people are proud of their literacy rate.
They have the highest literacy rate in the country and the female sex ratio more than males.
They are extremely sophisticated in their diet and traditional garments.

They are known for their excellent command over English all over the country.

Even though their accent is often made fun of, Malayalees are a cool bunch of people who are easy-going and approachable.

The Malayalam language has become the official language of the state of Kerala. 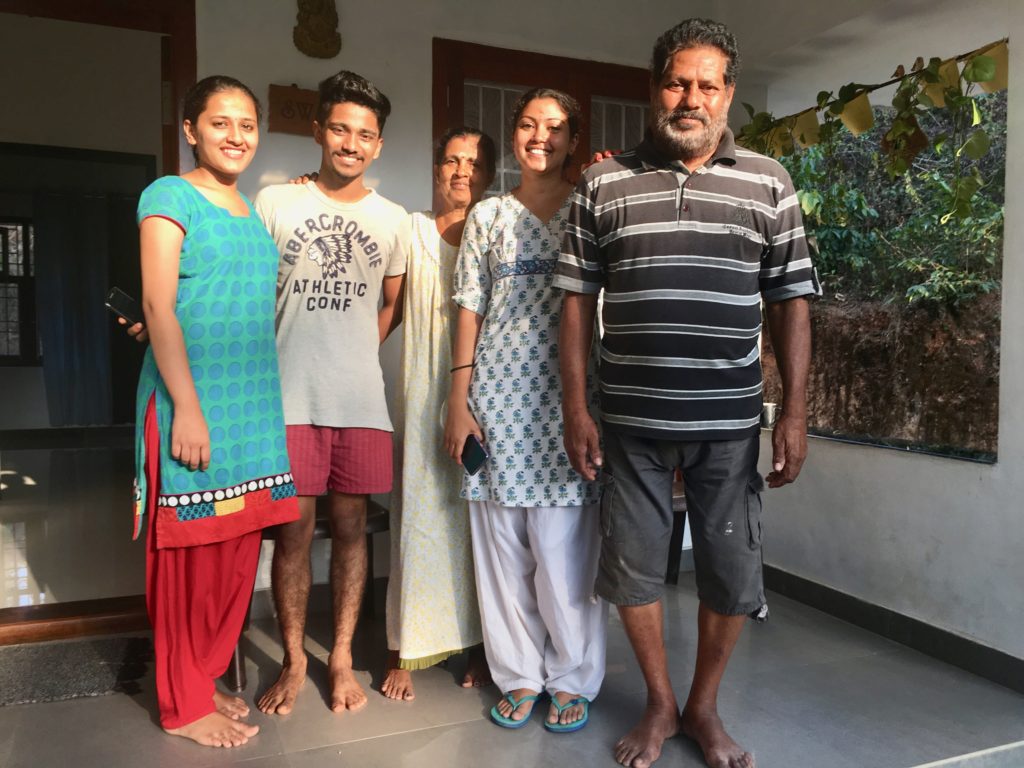 “Strictly keeping rhythm with the pulse of nature and identifying reasons for expressions from their tradition, these first inhabitants of Kerala gave form and meaning to a variety of art forms which are simple and fascinating.

Folk arts are always seen to have a direct link with the life and environment of the folks community with the practiced rituals of magical and religious nature.

Their artistic expressions originate from such rituals practices, to overcome the crisis and challenges faced by them and also to gather courage and confidence”.
Source: Folk Art Forms of Kerala by Balakrishnan Koyyal. 2016

One of this practice is the magnificent ritual of Theyyam

Mostly located in the regions of Kannur and Payyanur,  the Theyyams rituals are incredible feasts for the senses and most important aspect of the cultural and spiritual life of these communities.
The main actors in Theyyam are from the low castes communities and play an ardent role in the every side of the Keralite society.

The film Theyyam Of Gods, Heroes and Ancestors addresses this point by following an actor in different stages of his practice, whether the practice is in the ritual itself or in its prepararion.
https://patrickmorell.com/in-production/ 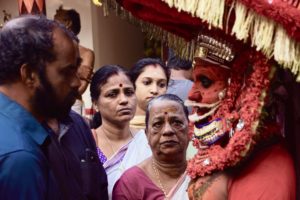 excerpt from “Theyyam, Of Gods, Heroes and Ancestors”
Long Version 2021

The following reel shows a sample of this gathering;

It was filmed in 2018 in the surroundings of Payyanur late at night during the very popular and colorful Theyyam of Makkam.
All Theyyams are supported by a story, a timeless story born of far away legends and myths.

In this particular Theyyam, the story goes thus:
” Makkam, a beautiful woman of higher caste, was falsely accused of having an affair with a low caste man.
Her brothers under the influence of their wives (who were jealous of Makkam’s beauty and position in the family circle)

murdered Makkam and her children.
But in the fire reappears Makkam and this time as a Goddess.

Her sacrifice made her the Goddess Makkam.
The Makkam Theyyam like many Theyyam are redemptive stories, starts in a sacrifice and end up in a God re incarnated.
These stories are sung in very long preparative chants called Tottams.

This reel is about the second phase of the ritual, the Vellatam which precedes the Theyyam ritual itself usually accompanied with fire (Meleri the Third eye) but not always. Theyyams are a changing form and can be hard to keep up with.

There are approximately 400 types of Theyyam, that means a lot of Gods and Goddesses including Vettakkorumakan, Vishnumoorthy Theyyam, Muchilot Bhagavathi Theyyam and Sree Muthappan Theyyam to quote just a few. 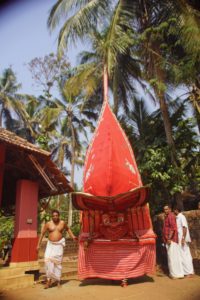 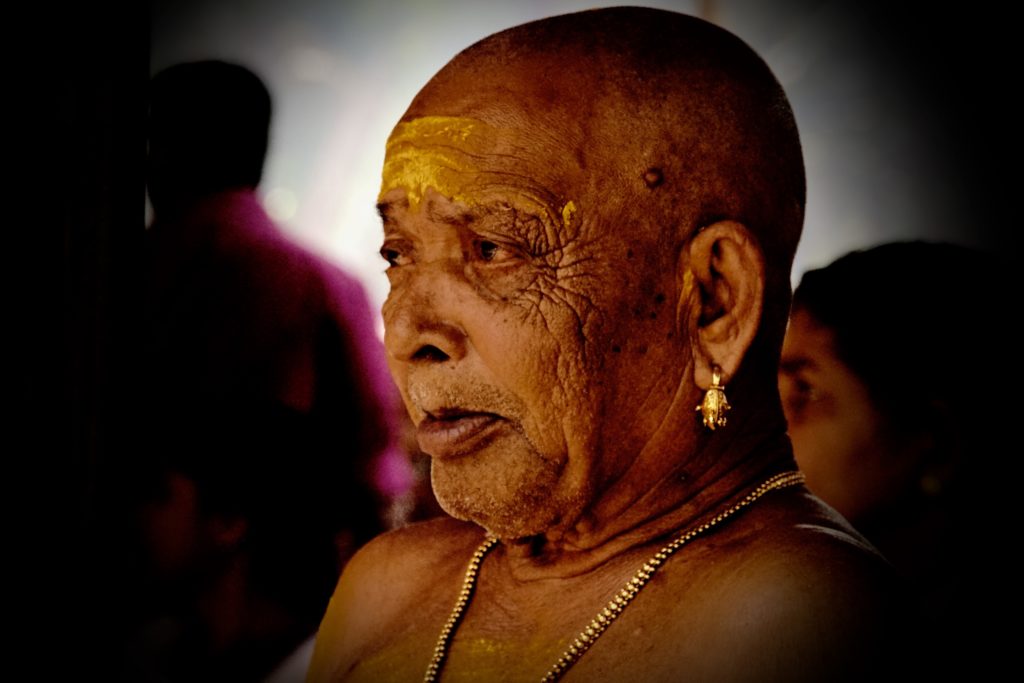 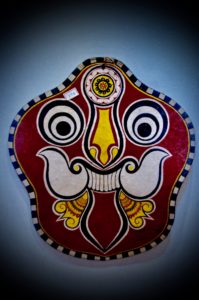 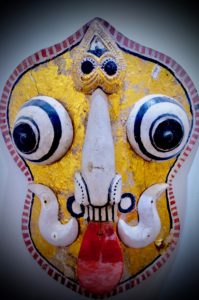 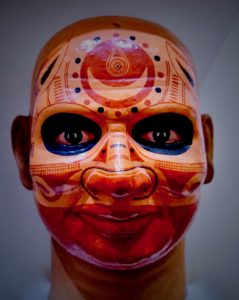 Theyyam masks and make up. Courtesy of the Kerala Folklore Academy in Kannur.

The ritualistic art form of Theyyam has nearly 400 varieties.
The face masks of Theyyam varieties at Chirakkal Museum, gives a hint of the artistic splendour. 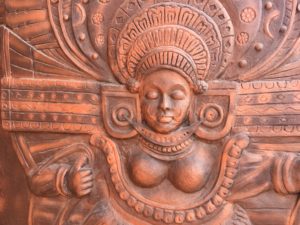 The outer wall of the museum showcases a sculptural representation of the folktale “Parayi Petta Panthirukulam” – a story of 12 children born to a woman of lower caste, and the 12 castes that formed thereafter.

The museum has life-size models of Theyyam as well as Padayani, miniature forms of other folk arts, and their costumes, headgears and masks.
Moreover, the agricultural equipment and percussion instruments used by tribal people are collected and preserved here.
The objects used by the royal family also find a special place in the museum.

The museum organizes education tours for young Keralite teenagers about the folk art culture and heritage of Kerala, particularly Theyyam and its different aspects. 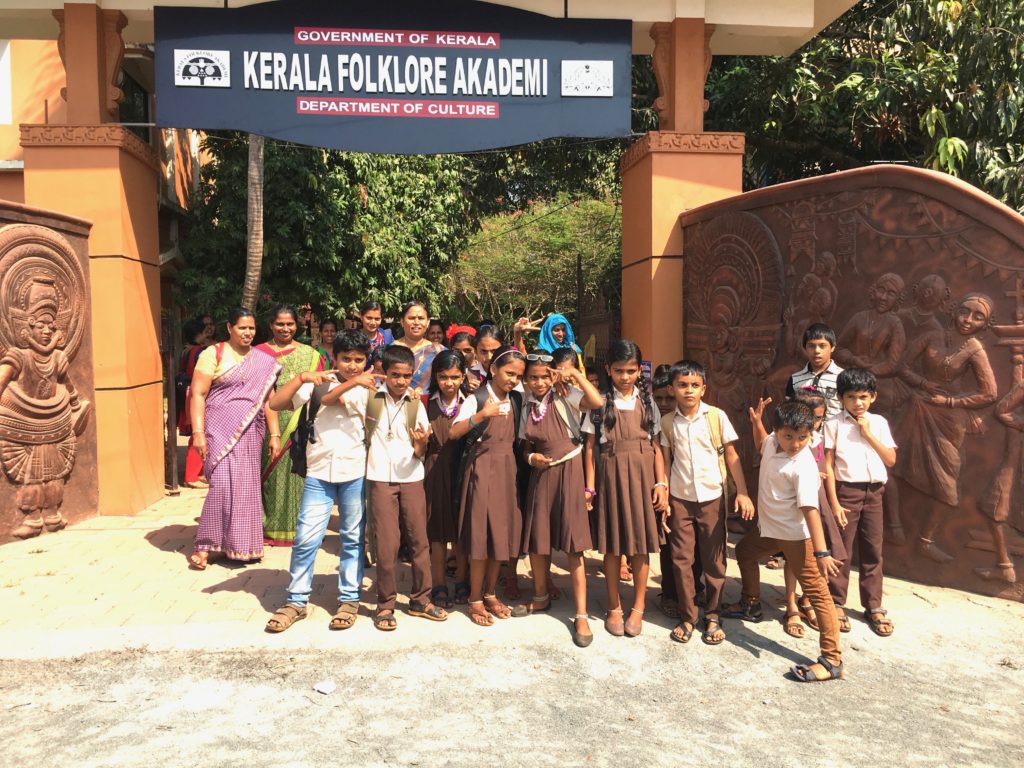 Keralite children in front of the Kerala Folklore Academy. 2018 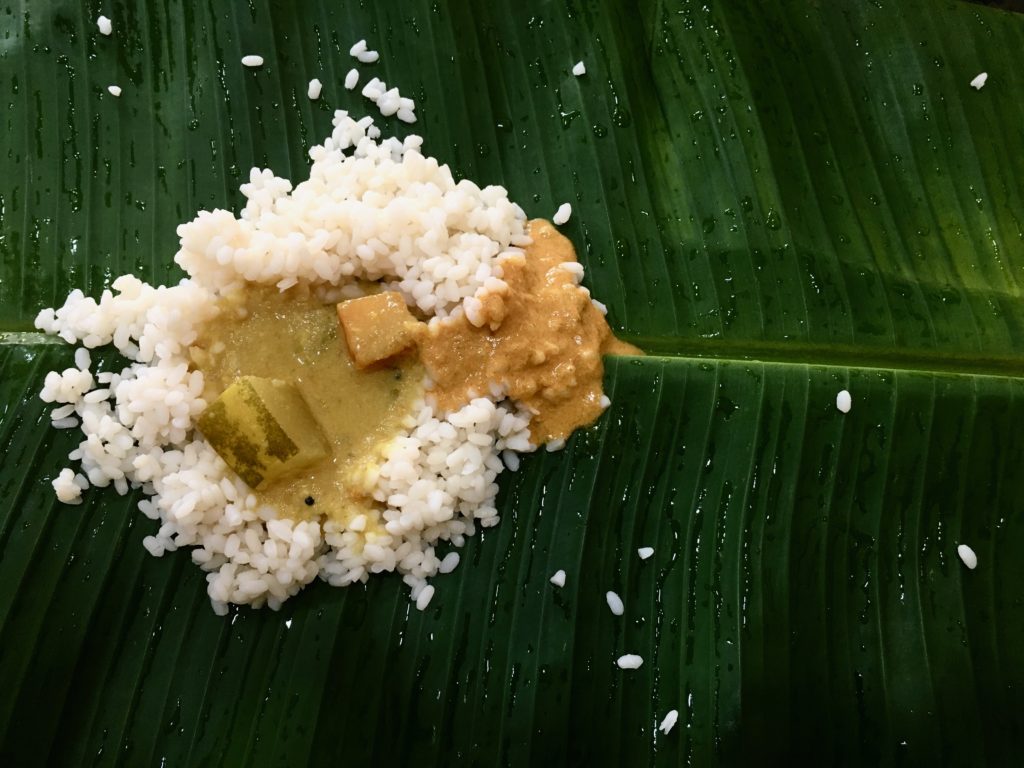 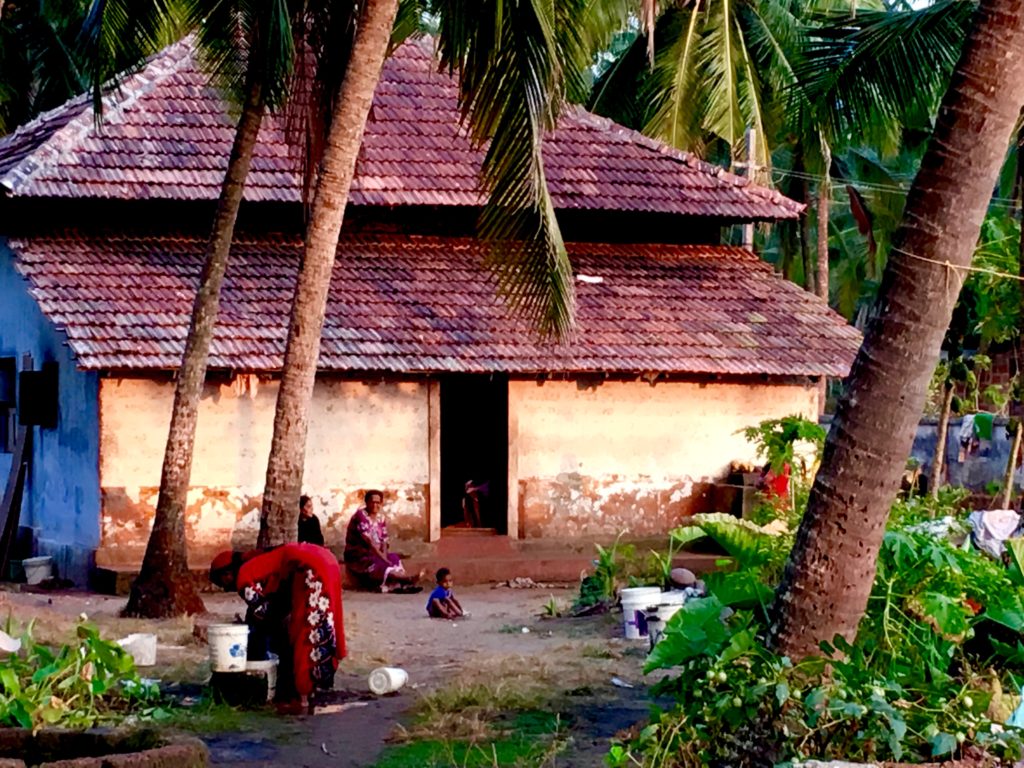 Kerala cuisine is linked to its history, geography,  demography and culture.
It offers a multitude of both vegetarian and non-vegetarian prepared dishes using fish, poultry and red meat with rice a typical accompaniment.

Kerala is known as the “Land of Spices” because it traded spices with Europe as well as with many ancient civilizations with the oldest historical records of the Sumerians from 3000 BCE.

Indigenous knowledge in agriculture, generated by the local people with their own experimentation to meet their diverse needs, is tightly interwoven with their beliefs, norms and culture.
Of late, a great deal of attention is paid to the Indigenous Technical Knowledge (ITK) in agriculture and there is a growing awareness about the need for integrating relevant ITKs with the modern technology packages for sustainable agricultural development.

The word “Kalari” means literally the center of learning.

Kalaripayattu is the Martial Arts form of Kerala, one that every Keralite takes pride in.
It is regarded as one of the oldest and the most advanced scientific martial arts form in the world, especially for countries like China or Japan who, through Buddhist priests, have practiced this martial art for the purpose of self defense.
(Source: “Folk Art Forms of Kerala” by Balakrishnan Koyyal)

Reel /excerpt from “Theyyam, Of Gods, Heroes and Ancestors

This excerpt takes place at the “SREE BHARAT KALARI,” Valapattanam (Martial Arts Center, in Kannur)and during some Theyyams such as the Kathivanur Veeran Theyyam,  Ramayana Theyyam and the Padaveeran Theyyams filmed in 2017 and 2019 in Kannur district.