There are still a few untrammeled places in the world — places where the sun still rises on the indigenous people and an unspoiled landscape.
Kalimantan or Indonesian Borneo , the third largest island in the world, is one such place. 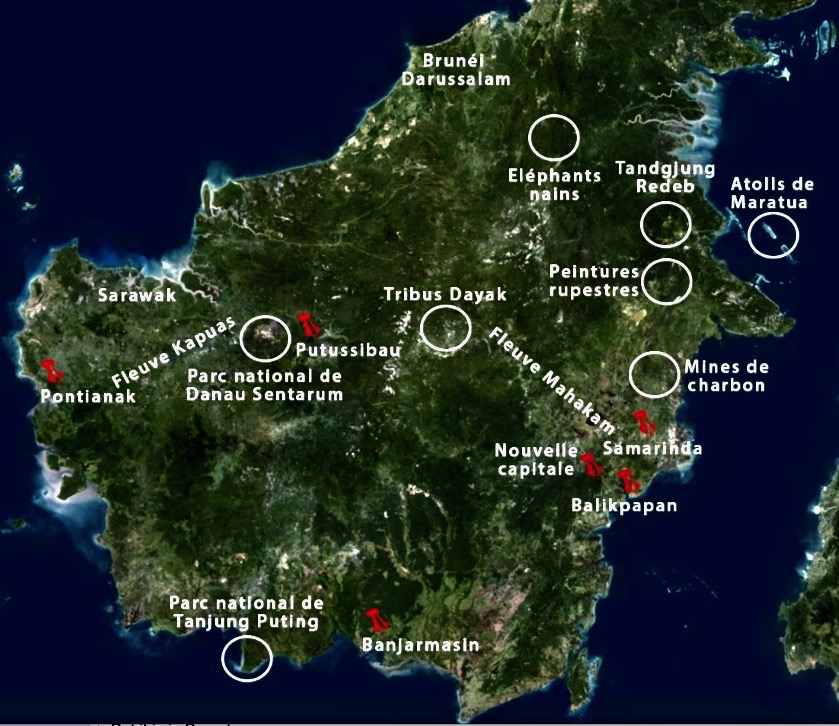 Forests play a key role in regulating the global climate seeing that more than one-third of the total Co2 reductions required to keep global warming below 2°C comes from them.
When mass deforestation happens, regional temperatures rise, which leads to drying and forest fires as seen in Brazil, California, Indonesia, Australia and the Congo Basin. 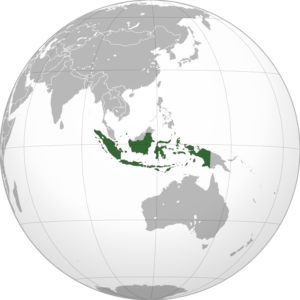 Indonesia is the world’s largest archipelago with almost 18,000 islands spreading between the Pacific and the Indian Ocean. It’s a hotspot of world diversity, home to hundreds of distinct cultures and over 3,000 animal species (including Komodo dragons, Sumatran tigers and orangutans). Along with this, Indonesia also houses the largest rainforest in all of Asia. 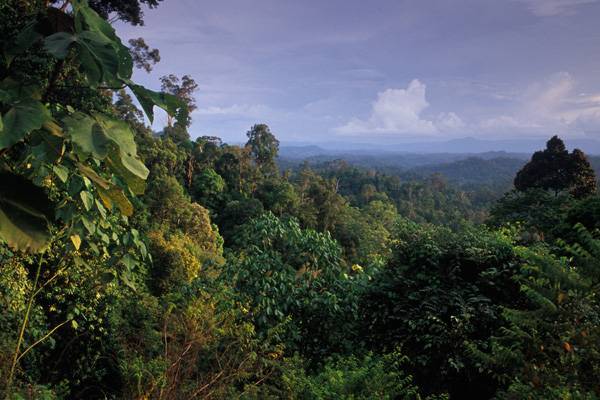 Today, Indonesia’s original forest cover is reduced to under half, (the world’s highest rate of deforestation) making it the leading cause of climate change.

As part of a broader project on optimization of land use and wildlife conservation in Kalimantan (led by an independent network of scientists and scientific institutions dedicated to changing and improving the well-being of all living things in Borneo), the film that we are proposing,  focuses on two main subjects:

1/Climate change through deforestation on the island of Kalimantan (Indonesian Borneo) – being an area of high forest diversity and rapid land change.

2/ The cultural heritage and arts preservation of Kalimantan (including women empowerment) and more specifically of the Dayak tribes. 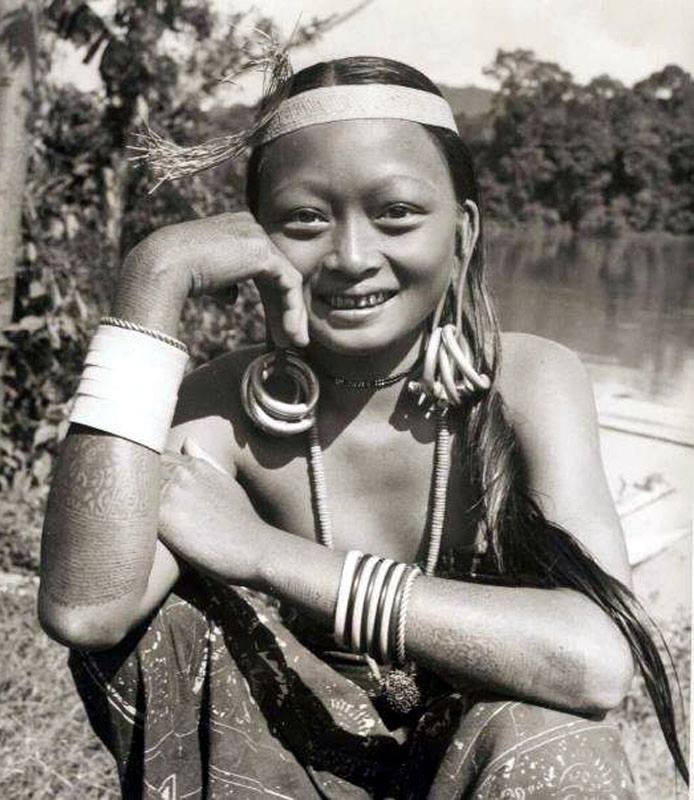 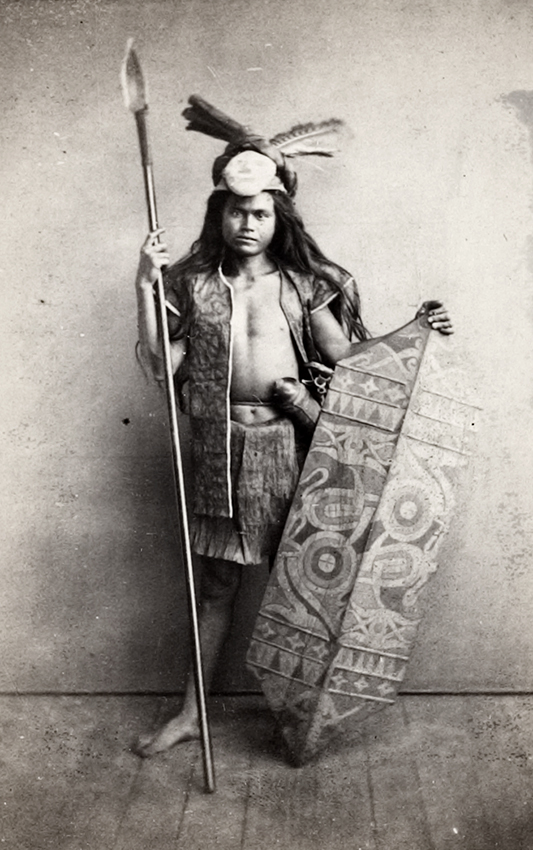 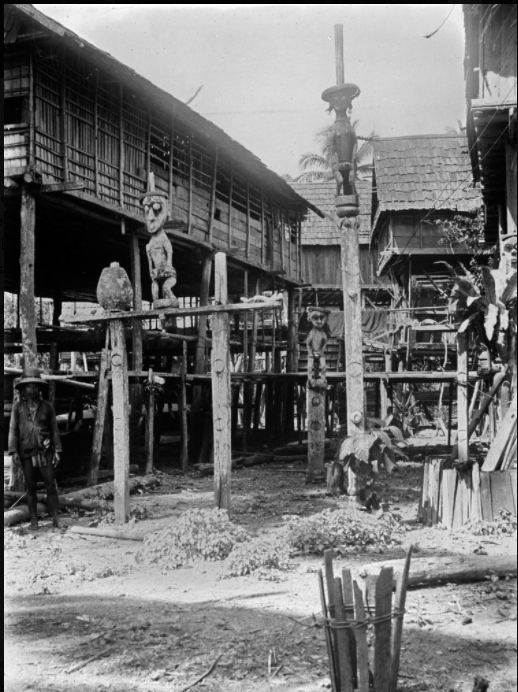 The survival of hundreds of Indigenous cultures is threatened as forests are destroyed and lands are appropriated for industrial plantation. 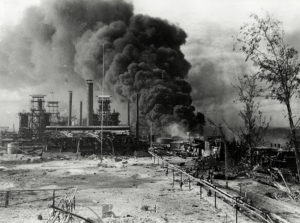 Borneo Island is one of the heartbeats of the world, therefore, the Indonesian government has already preserve 45 percent of Borneo (Kalimantan) as conservation areas and forests.
Home to the world’s oldest tropical rainforests, Borneo is still among the planet’s most biologically diverse ecosystems and is still  home to thousands of endemic animal, reptile, insect and plant species including orangutans, rhinos, hornbills, macaques and gibbons to name just a few not to forget the mysterious Black Orchid endemic to the island.
For countless generations, the Dayaks Borneo’s indigenous subsistence farmers and hunter-gatherers depended upon and managed these forests as their primary source of livelihood. Under their stewardship, the forests were able to maintain the highest species diversity of any terrestrial ecosystem, supplying food, medicines, cash crops, and building materials. 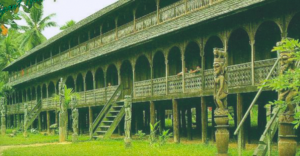 Regional wildlife including the Bornean Orangutans will be filmed while a captivating narrative will be highlighting the biodiversity of the island. 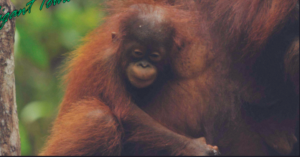 Saving the beauty and splendor of the Kalimantan ecosystem is of great importance.

By examining the relations between the biological and anthropological sciences, our team’s purpose is to launch this important endeavor as a documentary film mission in order to bring enhanced awareness to the public regarding the issues at hand.
The goal being through the interview sessions with experts is to make steps towards solutions and positive impact for a better world.

Also systematic research will be used to develop an educational curriculum based on art and science.
Emphasis will be on exanding the program for colleges and universities by assisting students and educators who teach circular economy (climate change, cultural heritage preservation, women empowerment), art, science and film-making. 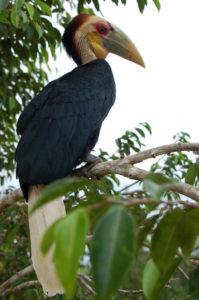 This project will be made in collaboration with the K-Mehra production based in Jakarta, Indigenous Peoples Alliance of the Archipelago (known as AMAN) and the Indonesian and US based NGO Montgabay.
It also received the support of the American non-profit Weber/Furlong Foundation (arts and educational organization that specializes in assisting museums and educational institutions on a global stage), U.N.E.S.C.O (Jakarta) and the Borneo Orangutan Survival Foundation (BOF) which is an Indonesian non-profit, non-governmental organization dedicated to the conservation of the endangered Bornean Orangutan –Pongo pygmaeus– and its habitat). 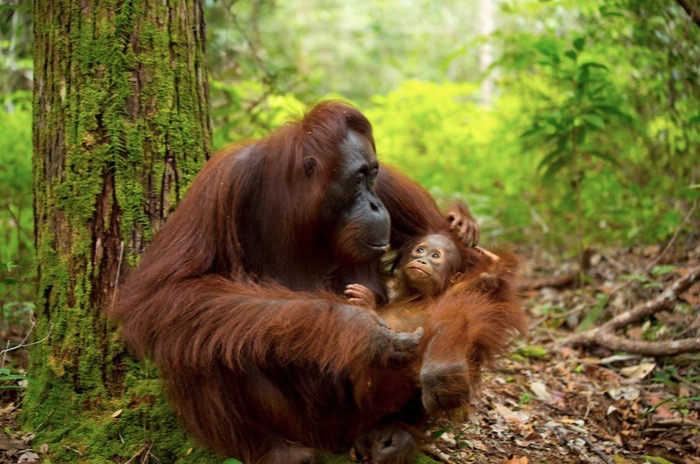 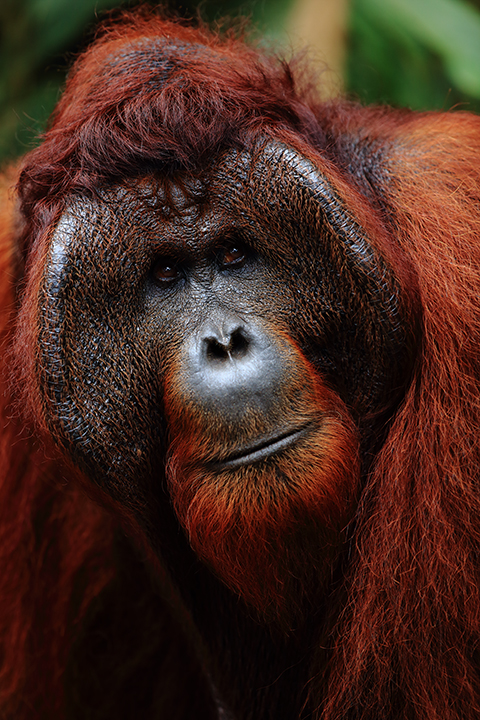 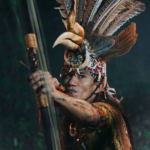 The DAYAKS and Tribal Arts

For many Aboriginal cultures, land means more than property– it encompasses culture, relationships, ecosystems, social systems, spirituality, and law. For many, land means the earth, the water, the air, and all that live within these ecosystems. As scholar Bonita Lawrence (Mi’kmaw, Indigenous studies at the University of Ontario Canada)  points out, using historical examples: “to separate Indigenous peoples from their land” is to “preempt Indigenous sovereignty.” 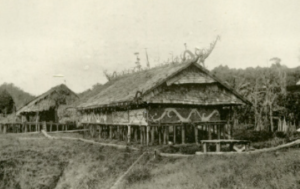 About 50,000 years ago, populations of Homo sapiens migrated from Africa and arrived in this equatorial land of what is Indonesia today.
The oldest traces of this presence are modern human fossils in Niah Cave, Sarawak [in the Malaysian part of Borneo] and cave paintings at Sangkulirang-Mangkalihat, in eastern Kalimantan.
Borneo is part of the Sunda continental shelf, which at that time was still part of the Eurasian continent because it was not submerged by the rising oceans that occurred at the end of the ice age.
It did not exist then as an island, nor did Java or Sumatra: all three were connected by a corridor of low plains made up of savannah which probably served as a corridor for human migrations. Sea level stopped rising about 5,000 years ago.
It was at this time that the Austronesian migrants arrived, known to be accomplished farmers and navigators [the inhabitants of the linguistic area stretching from Taiwan to New Zealand and from Madagascar to Easter Island are called Austronesians , (except for Australia and part of New Guinea).

These farmers mingled with the hunter-gatherers of Kalimantan the Punan, and developed a distinct agriculture.
These farmers  now known as Dayak, an umbrella term that covers various ethnic groups in Borneo, most of whom make their living from field rice cultivation as well as hunting and forest products. 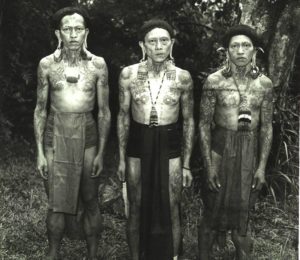 With their arrival, the forests of Kalimantan began to change.

They cut down the trees, work the land, and when they feel the soil’s nutrients are starting to run out, they abandon their fields to become forests again, waiting to be cleared again.

In the 1980s, resistance began to emerge with the slogan “petak ayungku”, “my land”. 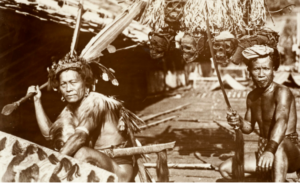 The documentary project has also received the support of the non for profit Weber/ Furlong Foundation (U.S) , especially for the tribal arts of Kalimantan and notably the Dayak women artists. 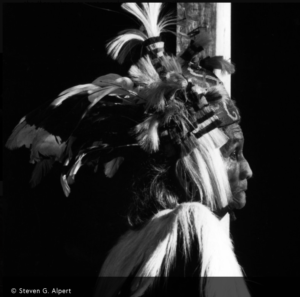 Once noted as fierce headhunters, the accouterments of Dayak warriors are highly accomplished yet pragmatic works of art, most notably their combat shields.
Dayak battle swords (mandau, parang ilang)vie for supremacy in their workmanship and blade quality with some go the finest weapons ever created in the archipelago.
Forged from local iron at high temperatures and repeatedly dipped in cold running water to temper their hardness, the Ngaju poetically refer to their swords as “Suluh Ambun Panyulak Andau”) which translate as
“ torch of the dew announcing a new day” 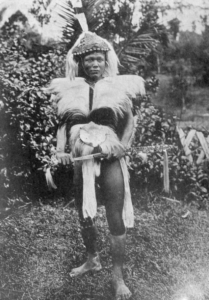 In the feminine realms of artistic production, Dayak groups like the Ngaju and Ot Danum are held in high esteem for their intricate designs on split fiber mats.
Women of the Maloh Kennyah, and various Kayanic people excelled in beadwork. 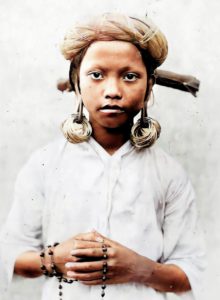 Iban work weavers fashioned exquisite skates (pua Kombut) and supplementary weft textiles (pua sung kit).
To become a master weaver among the Iban, a woman had to attain a requisite level of expertise and receive permission from the spirit world through dream quests in order to transmit the most potent designs to cloth.
Ceremonial textiles were displayed in a variety of ways to invoke blessings from the ancestors and the gods, to protect warriors, and to exhort menfolk to great feats in combat.
To this day “Women’s warfare” (kayu Indus) remains the denomination for the ceremony where threads are dyed and female prowess and determination are celebrated. The weaving arts are a powerful complement to the martial skills of the most vaunted Dayak warriors. 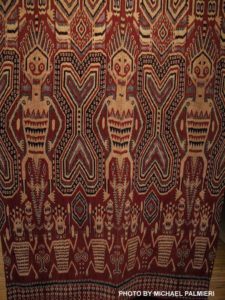 The Kaharingan & the Tree of Life

Additionally, the Dayaks have a reputation for being very careful about maintaining natural balance, especially in forest areas, which they consider to be the home of ancestral spirits. 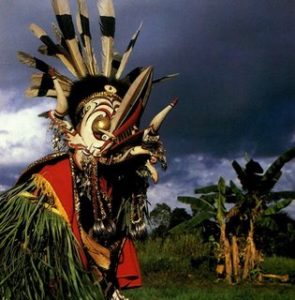 The Dayak communities are today divided among several ethnicities, and most of their members have embraced major religions such as Christianity or Islam.

Some of them  still shared a belief system called Kaharingan (which still permeates their culture today).
According to this belief, the world is populated by invisible spirits.
Kaharingan is a term in the Sangen (Old Dayak) language, built on the root haring. Haring means “to exist and grow” or “to live well”, a concept symbolized by the “Tree of life”, known as “Batang Garing”.
This tree is shaped like a spear pointing skyward. The lower part of the tree has a jar filled with holy water that represents “Jata”, the underworld. The celestial and subterranean worlds are connected as a single entity, in which they need each other. The Dayak believe that there is a spirit in every element, including trees.